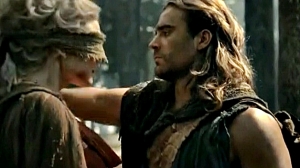 Gannicus' bid to stop the slaughter.

Spartacus (Liam McIntyre) – Showed cunning, mettle and cojones in defining the charismatic leader and, when needed, showed he still had the heart to exact an up close and personal revenge on Glaber for all his moral high-minded morality. McIntyre could never match Andy Whitfield’s tour-de-force in Blood and Sand, but he didn’t need to for a role in which he was like a street magician with all the drama coming in the reactions of those near him.

Gaius Claudius Glaber (Craig Parker) – Hubris overcame him – as we always knew it would – but not before he had shown a searingly ruthless streak previously more spoken of than relied upon. Had a small part (arf, arf) in a signature Spartacus scene that saw off the annoying Seppia, to everyone’s relief.

Crixus (Manu Bennett) – Having driven the plot in the first five episodes, the mighty Gaul took a backseat in the second half of the series, but was still compelling whenever on camera. The range of demands placed on Manu Bennett’s acting over the three series has been extraordinary and it is to his enormous credit that Crixus was always Crixus – and we loved him for it.

Lucretia (Lucy Lawless) – So it turned out that she was bonkers after all. Not before Lucy Lawless had made us think something different about Lucretia every time she was hove into view never fully present, but never fully absent either. No wonder even a fellow schemer like Illythia could not see through to her true intentions and her unyielding commitment to Batiatus.

Illythia (Viva Bianca) – Raged against everyone and everything and suffered – deliciously – before even her nose for self-survival let her down. Never lost the murderous streak that ran through her like Spartacus’ sword ran through her husband, but was matched when Lucretia’s one big lie trumped her many small deceits.

Oenamaus (Peter Mensah) – With very little screen time and few words of dialogue, Peter Mensah made us love Oenamaus more than ever, as he slowly recognised Gannicus’ remorse and forgave a man exacting a greater punishment on himself than even Doctore’s weapons could inflict. He fell for his brothers – and leaves a huge gap come Series Four.

Ashur (Nick Tarabay) – The biggest disappointment of Vengeance, Ashur – the sharpest brain of them all – was blinded by lust and ambition and walked to his death with barely a whimper. I would love to have seen Ashur as double agent, playing one side against the other, the amoral pivot between Spartacus’ dreams of freedom and Glaber’s fascistic worship of Rome. What a missed opportunity from a writing team that got so much right.

Mira (Katrina Law) – As gladiatorial as any gladiator, but as fragile as Blood and Sand’s Spartacus was in his conversations with Varro, Mira stood equal to any of Spartacus’ lieutenants before she caught the blade intended for her lover / leader. Her overstepping of her place in her attempt on the life of Illythia was exactly what one would expect of her – and her pain at the price she paid, showed her to be the female equivalent of Blood and Sand’s Crixus. Alas, she will never grow into Vengeance’s Crixus and Katrina Law’s brilliantly realised warrior-princess can develop no more.

Agron (Dan Feuerriegel) – Wobbled and wavered, but stayed true to Spartacus and Nasir despite the pull of his countrymen from East of the Rhine. Brilliant in the close quarter fighting, when Agron stood shoulder to shoulder with Crixus, Gannicus and Spartacus ready to go down the mountain, he was their equal – an impressive feat of acting on Dan Feuerriegel’s part, for a character given far less screen time than the others over the three series.

Gannicus (Dustin Clare) – Brilliantly portrayed by Dustin Clare as the world-weary ambidextrous fighting genius whose love of Oenamaus trumped even his love of himself. His commitment to the cause was seldom evidenced in words, but all in the sideways glances, the growing understanding of Spartacus’ cause and his need to confirm his identity as a gladiator and not a usurper in order to face another day. His kidnapping of Illythia and the carnage strewn to achieve it was a brilliant piece of film-making.

Overall report – Vengeance’s extraordinary mid-season torching of the arena may have led to expectations being set just too high for episodes 6-10 – and ambition’s debt was paid with a slight letdown over Vengeance’s second half. We’ll miss Lucretia, Glaber and, especially, Ashur and Illithyia, but we can look forward to more from Spartacus, Agron and, especially, Gannicus and Crixus, as Caesar himself lets slip the dogs of war and cries havoc in Series Four.

My half-term report card is here.