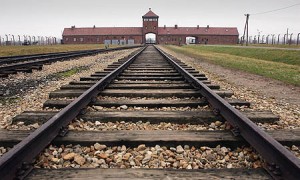 Twenty-five years or so ago, ordering a beer in a Prague cafe, my bad German attracted the attention of the only other English speaker in town, an American, and we got talking. I wasn’t intending a trip to Poland, that slab of plain so unfortunately flung between Germany and Russia, because I had no visa, the London Embassy needing more time and money than I had found convenient. But, following the American’s directions to an upstairs office nearby, ten dollars bought me the entry documentation and I was off on the sleeper to Warsaw and on to Krakow.

Two days later, an old train rattled over the lines left unbombed to Auschwitz. There was no sense of ghoulish tourism then, barely a tourist in those rickety carriages, so I was relieved to fall in with a couple of Dutch guys with whom I shared beers and jokes, imagining the Olympic Games staged like an early round of Miss World in traditional national dress (they didn’t fancy their chances in the 100 meters – the clogs you see). We reached the small rural railway station in laddish good spirits and a handful of us disembarked, the air still, the clouds pushing down a little, the station quiet. There was a guide and we listened respectfully to her introduction as we walked towards the gates, wondering whether they were Soviet impostors or if they had somehow survived all, all… that. The path’s gravel crunched under our sandals reminding us that we had some dominion over this awful space, but, as we entered the nearest building, words wouldn’t form in our mouths and and we could hear only our guide’s soft voice as we read the multilingual labels on the display cases of false teeth, walking canes, children’s shoes. Soon she joined our silence and nothing was said – nothing could be said.

We bore witness to the blocks in which men, women and children were invited to shower in rooms with floors that had no gullies, no drains, no water – but we had long since been overpowered by the scale of the camps, the banality of its evil, the collapse of the comfortingly abstract into something terribly tangible. We sat on the steps of, what, some building or other and still said nothing. Or rather, still could say nothing. Words, language, thoughts even had run out – insufficient to do the job they had done for 25 years or so. One of us eventually broke the stillness and we walked, heads bowed a little, back to the railway station to catch the return train. That evening, we played pool, sank a few very cheap beers and tried to chat up the local girls, but our hearts weren’t in it. We made our farewells and the Dutch lads headed towards Berlin, while I made for Budapest.

Weaving in and out of The Zone of Influence, Martin Amis’s novel set in a thinly disguised Auschwitz, is the same problem I had – what can language do when set against this vast depravity? Amis feels compelled to write about the Camp, but feels equally compelled to acknowledge that the subject exhausts language, exhausts understanding, exhausts explanation – indeed, exhausts even the question of whether it is explicable at all. What emerges is an unsatisfactory, disgusting book that it also moving and thrilling, worthy of its sources (including, read halfway between my first and now my third “visit” to Auschwitz, Primo Levi’s heartbreaking If This Is A Man).

Amis gives us three narrators, all with familiar, if re-energised, Amisian voices, their accounts overlaying each other, as events are described by each of them in turn.

Golo Thomsen is the nephew of Martin Bormann, an photofit Aryan if not quite a photofit Nazi, who uses his connections to cover the fact that his ardour is more directed towards the Fatherland’s big, busty Mädchen than the Fatherland’s thousand year destiny. Thomsen is educated, an intellectual and a cynical exploiter of what comes across his path – until his eye falls upon Hannah Doll, the kind of woman who looks like she might, just might, serve foaming steins of bier in a keller, but is actually the apparently demure, much younger wife of Paul Doll, the Camp Kommandant.

Doll is the second narrator and a classic Amisian man: small (in every sense); unintentionally funny; drunk on power. His voice drives the narrative forward simultaneously revealing the horrors he supervises mediated through euphemism and a 180 degree skewed perspective, so twisted that even a fanatical dullard like Doll has cause to question. He gets most, if not quite all, of those signature Amis sentences that fizz off the page provoking a guilty laugh, the author catching you again in that smartarse’s net he has used since The Rachel Papers. How about (Doll at an opera) – “It wasn’t like the last occasion, when I became gradually immersed in the logistical challenge of gassing the audience”. BANG! There’s more, a lot more, like that – unspeakable crimes spoken of in the argot of the put-upon middle manager.

The third voice is that of Szmul, a Polish Jew in charge of the processing and disposal of thousands of dead bodies. Intelligent and sensitive, these two traits serve both to keep him alive, as he continually makes himself too valuable to kill, and to torture his soul, as he wrestles with his guilt at not fighting back and his desire to ensure that his story is told. His compromises reach their inevitable endpoint when he sees one of his teenage son’s childhood friends heading for the shower block and intervenes to call in “a favour”.

Other characters, factual and fictional, turn up in the narratives, as the War slides away from German control after Stalingrad, but the Camp is the fixed point of the novel, a crushing, cruel, incomprehensible site of the application of industrial logic to psychotic ends. In an Afterword, the author writes of the impossibility of identifying why the Holocaust was not just prosecuted, but prosecuted with such fervour, to the very end, the Camp lasting longer than the Reich itself, smashed and overrun, its demise long expected, not least by its wretched architects.

By the last page, Amis, like me and the Dutch lads a quarter century gone, has run out of language, explored all the places words can go, exhausted all the accounts of the unaccountable. He has left behind a book that jars the reader with its appalling humour and its sickening scenes and reminds us – not least because German, the language in which the Final Solution was framed, sits so close, so uncomfortably close, to English, the means by which we, a we that has unimaginable military and industrial power at our disposal, explains and manages the world. The Camps may be bounded by the iconography, the politics and the social conditions of Europe in the first half of the 20th century – but not the men. Thomsen, Doll and Szmul walk amongst us – they always have and they always will.