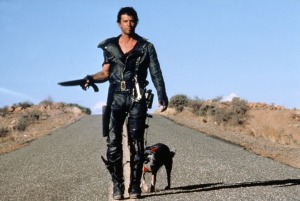 One man and his dog

Every creature in Australia is out to kill you – and, in George Miller’s extraordinary debut movie, that applies to the human creatures as much as the spiders and snakes who have long been man’s adversary in the brutal Bush. There’s not much story in the Mad Max movies – they don’t need much – but there’s a visceral sense of place, of jeopardy and, in those faraway days before CGI, of reality.

I first saw Mad Max in “my mother’s” cinema in 1979 on my father’s recommendation (an unlikely one, given his general distaste for dystopian sci-fi shoot-’em-ups). Back then, it was perfectly possible to see a film blind, as tabloid newspapers didn’t review many movies, Barry Norman was only on BBC 1 once a week and there was, of course, no internet. And, at a time when multiplexes were just starting to be rolled out and a night at the flicks still comprised a B movie and main feature, you could see a lot of cultish stuff (so long as it wasn’t subtitled – that was for BBC 2 and probably a mite racy for Liverpool). Like most who saw Mad Max first time round, I emerged blinking and shaking after the ride of my life.

We knew more about Mad Max 2, the success of its predecessor making a star of Mel Gibson (not yet bonkers) and the marketing budget set for a mainstream blockbuster release. It was still a shock to the system, its tattooed, post-punk warriors feeling barely human at all in 1981. There had been nothing on screen quite like them before, although since there have been many imitators, especially in computer games.

Watching both MMs again now in a double bill on the big screen, the two films seem much more tame – but what they lose in visceral gut-wrenching thrillerdom, they gain in aesthetic pleasure. Everything looks perfect, from the low shots of the high brick walls of the police station in MM1 to the high shots looking down on the pathetic compound of the Eloi-like commune surrounded by their Morlockish enemies in MM2. Australia’s flat land, broken by its spiky rocks, and (especially) its huge sky sending forth that bright, bright light, has never been more integrated into a film and I include Walkabout in that. The big screen, the HD and the sound system of a 21st century cinema create literally different films than the ones you’re familiar with on DVD or Sky Movies. You can’t do epic on a 52 inch screen – but on a 52 feet screen? Well…

I had wondered whether it would be worth it to make the effort to see such familiar work again – and MM2’s plot is barely more fleshed out than MM1’s – but it was, it really was. Perhaps the same thinking can now be applied to the first two Terminator films and we can see those masterpieces on a double bill on the big screen to support its franchise’s summer reboot too. Indeed, why not reserve one screen on one day per week for a retro-evening giving us 20th century classics in a 21st century cinema. Let’s start with Apocalypse Now and Aguirre – The Wrath of God: because that’s definitely not just messing about in boats.